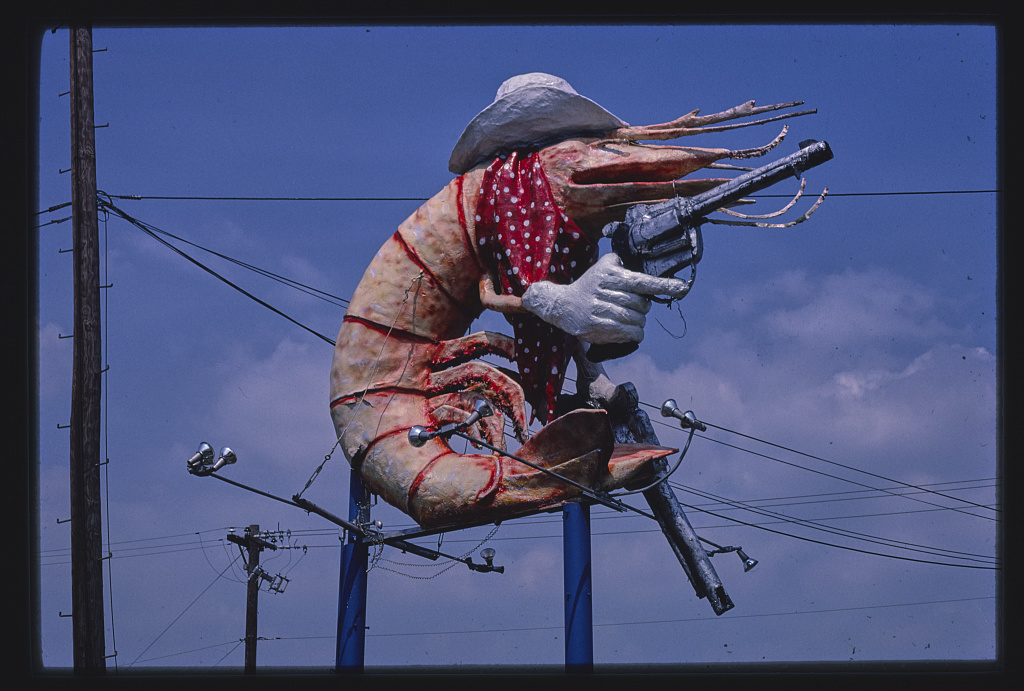 A shrimp with a cowboy hat holding a couple of pistols.

Texas is the second largest state in area (268,596 mi2) and by population (29,183,290 in 2021). Texas would be the 39th largest country in area after Zambia and before Myanmar. It would be the 50th most populous country after Nepal and before Venezuela.

What’s in a name?

The origin of Texas’s name is from the word táyshaʼ, which means “friends” in the Caddo language.

Unfortunately for the Caddo people, the US government wasn’t their friend. In the 1830s, the Caddo people were forced onto a reservation in Texas due to the Indian Removal Act. They were then removed to Indian Territory in what is now Oklahoma in 1859. Today the Caddo Nation has about 6,000 members with their capital in Binger, Oklahoma.

The Republic of Texas

Constitution of the Republic of Texas
General Provisions Section 9.
All persons of color who were slaves for life previous to their emigration to Texas, and who are now held in bondage, shall remain in the like state of servitude, provide the said slave shall be the bona fide property of the person so holding said slave as aforesaid. Congress shall pass no laws to prohibit emigrants from the United States of America from bringing their slaves into the Republic with them, and holding them by the same tenure by which such slaves were held in the United States; nor shall Congress have power to emancipate slaves; nor shall any slave-holder be allowed to emancipate his or her slave or slaves, without the consent of Congress, unless he or she shall send his or her slave or slaves without the limits of the Republic. No free person of African descent, either in whole or in part, shall be permitted to reside permanently in the Republic, without the consent of Congress, and the importation or admission of Africans or negroes into this Republic, excepting from the United States of America, is forever prohibited, and declared to be piracy.

After a lot of political wrangling and talk about manifest destiny, Texas was admitted to the union via treaty in 1845. Texas is the only state to enter the United States by treaty instead of territorial annexation. Mexico was more displeased by this development.

General Zachary Taylor was sent to garrison the southern border of Texas after it was admitted to the union. Mexico and the Republic of Texas had differing opinions on where this border was located. Mexico said the border was the Nueces River and the Republic of Texas said it was the Rio Grande. The Rid Grande is about 150 miles south of Neuces where they discharge into the Gulf of Mexico. Mexico was still of the opinion that Texas was a part of Mexico, so they didn’t take kindly to US troops entering Texas. After ignoring Mexican demands to withdraw his troops, Taylor began to build a fort near the mouth of the Rio Grande on the Gulf of Mexico. Mexico was even more displeased by this development. They regarded fort building in Mexican territory as a violation of Mexico’s sovereignty. Thus began the Mexican-American War.

Texas declared its secession from the U.S. in early 1861 by a vote of 166-8. They ratified the Constitution of the Confederate States on March 23rd, 1861 and joined the Confederacy.

“We hold as undeniable truths that the governments of the various States, and of the confederacy itself, were established exclusively by the white race, for themselves and their posterity; that the African race had no agency in their establishment; that they were rightfully held and regarded as an inferior and dependent race, and in that condition only could their existence in this country be rendered beneficial or tolerable.

That in this free government all white men are and of right ought to be entitled to equal civil and political rights; that the servitude of the African race, as existing in these States, is mutually beneficial to both bond and free, and is abundantly authorized and justified by the experience of mankind, and the revealed will of the Almighty Creator, as recognized by all Christian nations; while the destruction of the existing relations between the two races, as advocated by our sectional enemies, would bring inevitable calamities upon both and desolation upon the fifteen slave-holding states.

By the secession of six of the slave-holding States, and the certainty that others will speedily do likewise, Texas has no alternative but to remain in an isolated connection with the North, or unite her destinies with the South.”

Over 70,000 Texans served in the Confederate army and over 2,000 Texans fought for the Union army.

Confederate Heroes’ Day is a state holiday and April is recognized as Confederate History Month.

Juneteenth commemorates the announcement of the Emancipation Proclamation in Galveston by General Gordon Granger on June 19, 1865, almost two and a half years after the original announcement.

General Granger and 2,000 federal troops arrived in Galveston to enforce the emancipation of slaves, oversee the transition of power, and nullify all laws passed by Confederate lawmakers. Granger’s men advanced through the city reading General Order No. 3.

“The people of Texas are informed that, in accordance with a proclamation from the Executive of the United States, all slaves are free. This involves an absolute equality of personal rights and rights of property between former masters and slaves, and the connection heretofore existing between them becomes that between employer and hired labor. The freedmen are advised to remain quietly at their present homes and work for wages. They are informed that they will not be allowed to collect at military posts and that they will not be supported in idleness either there or elsewhere.”

On November 22, 1963 at 12:30 p.m. local time, President John F. Kennedy was assassinated in Dallas while driving in a presidential motorcade through Dealey Plaza. He was fatally shot by Lee Harvey Oswald from the 6th floor of the Texas School Book Depository building that overlooked the motorcade route. Oswald fired three shots. One shot in the back and one shot in the head hit and killed Kennedy. One shot hit and injured Texas Governor John Connally in the back.

Oswald was later confronted by police officer J. D. Tippit walking through a neighborhood about three miles from Dealey Plaza. Oswald shot Tippit four times and ran off. Tippit died from his wounds. He was seen entering the Texas Theatre without paying and was arrested at the movie theater around 1:40 p.m. Oswald was charged with the murders of Kennedy and Tippit that evening. He denied being involved in either shooting.

Lee Harvey Oswald was assassinated by Jack Ruby as he was being escorted to a car at Dallas Police headquarters. He was shot in the chest on live TV and died a couple of hours later.

JFK was the 4th president to be assassinated.

“Don’t Mess with Texas” began as an anti-littering advertisement for the Texas Department of Transportation.

In 1985 TXDOT hired GSD&M to come up with an anti-littering slogan aimed at 18-35 year old males. “Don’t Mess with Texas” is what they came up with.

For some reason they turned “Don’t Mess With Texas” into a virtual reality experience where you stand in a field along a Texas highway and put trash in a barrel. Sounds fun.

The name of the Six Flags theme parks refers to the flags of the six countries that have ruled over Texas. Spain, France, Mexico, Republic of Texas, USA, and the Confederate States of America are the six flags. Their first theme park in Arlington, Texas opened in 1961.